When you travel to Fiordland/Te Anau you will be visiting one of the most beautiful and dramatic parts of New Zealand.

With it's mountainous country and multitude of activities within, it's a magical place to be absorbed in.

Much of Fiordland's forest is beech with two main varieties with  silver beech being the most wide spread. The red beech is also found in more sparse areas such as the Eglinton valley. Evolution over time thru glacial formation means much of Fiordland's forest clings to steep mountain sides. High rainfall from coastal weather fronts often brings tree falls, yet mother nature is quick to repair. Other species such as totara, rimu and miro also hold a prominent place in Fiordland.

In the wetter areas, shrubs, tree ferns, mosses and lichens grow in abundance. Above the bushline, snow tussocks dominate with showy alpine daisies, buttercups and other herbs.

Fiordland is home to several threatened native animals. The Murchison and Stuart Mountains are home to about 160 takahe - a flightless alpine bird thought to be extinct until the 1950's. Our Department of Conservation have a rearing programme locally where the birds are breeding in a hope to boost numbers in the wild. The kakapo,  a ground dwelling parrot near extinction, has been moved to protective islands in Fiordland.

The Eglinton Valley is a natural habitat for yellow-crowned parakeets, yellowheads (mohua) and long-tailed bats. Brown teal, blue duck and southern crested grebes are found on Fiordland lakes and streams.

Fiordland weather is highly changeable, so when you visit prepare for all conditions. Cold temperatures, snow, strong winds and heavy rain can occur at any time of the year. It can be sunny too though!

In New Zealand, January and February are the warmest months of the year (summer), and July is the coldest (winter). Fiordland in the south is generally colder than the north, but weather varies throughout the region and can change rapidly within a day.

Summer in Fiordland offers the warmest days (e.g. between 10 - 28°C). Winter temperatures (between May and November) can be between 1 - 9°C (example from July), however cold weather can occur at any time of year. 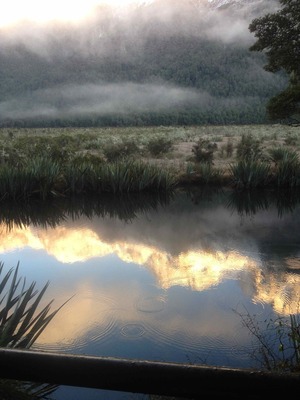